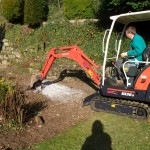 We have been talking about the ‘new studio’ for many months but at last things are underway. A lot of people assumed that by building a new studio we mean fitting out a room with lights, cameras etc. We will of course be doing this, but we are also physically building the room!
We broke ground on 7 March 2011 and have been working hard ever since!

We ending up removing sixteen cubic yards of soil/chalk to construct the air gap below the building!

The messy bit was digging the trench for the services, this has to be a minimum of 500mm deep in the UK.

Concrete pads were build to hold the brick pillars (engineering bricks, not normal bricks) which will take the weight of the building which is built on a ring beam.

The framing was started last weekend (26 March 2011) with the simple sections built first before fixing. The two walls with windows and doors were built in situ.

The windows and doors are double glazed uPVC units that we rescued from our conservatory when we replaced it last year. uPVC is horrible stuff (from an environmental perspective) so it was great to be able to re-cycle it. Ideally for a studio you wouldn’t build any windows in to the building but  we will add blackout blinds. The building has to fit into the surroundings and with no windows would look like a big garden shed!

The breather membrane allows moisture to escape, but not to enter. The roof is only half completed but you can get a good idea of the building now.

Inside the space looks large (6 metres by 4 metres, or approximately 20 feet by 14 feet). All the lighting should fit nicely in the open roof.

There is still a long way to go but we hope to get the roof finished and the building waterproof in the next week.

As I am most of the work you will understand why the TTFN website has been quiet over the last few weeks. Once we get the studio finished things will be very different! We have some exciting plans…..